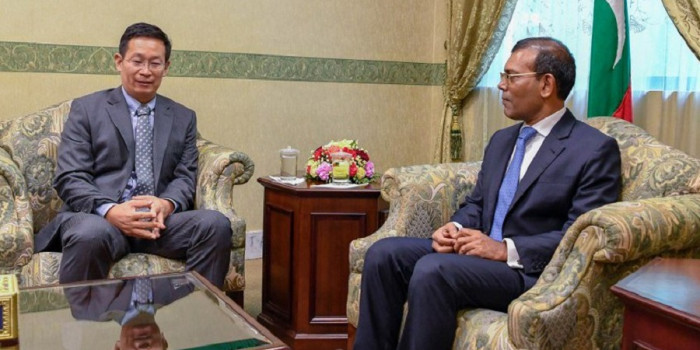 The Chinese ambassador to the Maldives, Zhang Lizhong, has responded to comments made by the Speaker of the Citizen’s Majlis, Mohamed Nasheed.

China “doesn’t export ideology”, but instead “shares development”. The Ambassador cited the trade relationship between the Maldives and China as a good example of an equal relationship of mutual benefits between a big and small country.

The Ambassador claimed that any attempt to drive a wedge between China and India was “futile”, due to the global and strategic significance of such a relationship. The Ambassador likewise recognized the benefit the Maldives had to gain by developing good relations with both India and China.

“Sorry about the irresponsible remarks by Mr. Speaker on China. China develops ties with all countries based on the Five Principles of Peaceful Coexistence and never interferes with any countries’ internal affairs.

China doesn't export ideology, but shares development dividend. China and Maldives have set up a good example of state-to-state relations between big and small countries featuring equality and mutually-beneficial cooperation.

China has achieved historic and all-round human rights progress. China has lifted nearly 800 million people out of poverty and by 2020 will eliminate all extreme poverty under the current UN standards, setting a milestone for the promotion of human rights in the world.

Any attempt to drive a wedge between China and India is futile. The China-India relations have transcended bilateral scope and have global and strategic significance. Developing better relations with China and India simultaneously is in the best interest of the Maldives.”